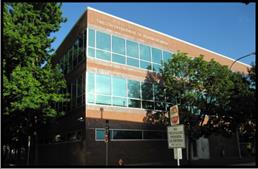 EPE assisted the ODOT Region 1 Headquarters in the completion of a three story, 90,000 square foot office building roof replacement assessment. From signing the contract to the completion of the assessment, which included the submittal of MEP design and cost estimate, this project took twenty nine days to complete. ODOT initially sought out MEP firms in order to replace their old rooftop units at the Flanders building. EPE took the initiative to propose a different scope of work in order to more effectively solve the true problems that ODOT was experiencing with the buildings HVAC systems and associated controls. Once EPE’s proposal was selected, the commissioning team coordinated the kickoff meeting to thoroughly define the scope of work, and communicate to all members their role in the commissioning process. EPE proposed that a proper investigation of the entire HVAC system, prior to the replacement of the rooftop units, would better fix the long term issues and harvest energy savings with new high efficiency rooftop units. With further evaluation and testing, EPE compiled a master list of findings as part of the replacement scope of work. It was discovered that the bulk of the problems were with the direct digital controls and the downstream VAV terminal units, rather than the upstream rooftop units themselves. We then worked closely with our sub-­‐consultant to finalize the construction documents. Through this project EPE demonstrated to ODOT how our approach is able to incorporate the capital design service with existing building commissioning service in order to meet or exceed the owner’s project needs.

We respect your privacy. Energy Performance Engineering (EPE) collects, uses, and protects information obtained from you on this website. We ask for only the information we need to provide the service you’ve requested. EPE does not use or disclose information about you or information that you may give us, such as your name, address, email address or telephone number, to any outside companies or parties. We do not rent, sell, or trade any of our mailing lists. EPE provides individuals with the right to opt-out of receiving email marketing and to update, supplement or delete their own voluntarily submitted personal information which EPE uses for the previously noted business purposes.
Go to Top